Number and types of distractions on cellphones grow

Smartphone ownership trends are having a big impact of drivers' behaviors. In 2015, 88% of drivers with cellphones own smartphones, and in the past five years, the most dramatic increase in ownership has been among drivers over 40 years of age, State Farm found.

“It’s interesting to observe how the number and types of distractions available on cellphones have grown over the years we have conducted this annual survey,” said Chris Mullen, director of technology research at State Farm. “We want to remind people that despite these and other demands on your attention when driving, please stay 100% focused on your drive.”

Here are nine trends insurance agents should be aware of regarding the use of smartphones by their clients. Will these behaviors have an impact on future Auto insurance claims?

Many of the cellphone-related distracting behaviors have significantly increased since the 2009 study. In 2015, behaviors that continued to increase include:

In 2015, the State Farm survey revealed even more activities that can take drivers' eyes off the road and hands off the wheel.

3. Drivers perceive many behaviors as distracting, but they still report participating in them.

In general, adults younger than 40 years of age are more likely than those 40 and older to report:

Those 18-29 year-olds are more likely than those 40 and older to report:

5. A few distracted driving behaviors are more common among those living in metro areas.

Drivers living in a large metropolitan area with over one million people were more likely than those living in a rural or small town with less than 75,000 people to report doing the following while driving:

City drivers may be more likely to participate in these behaviors than rural drivers due to the effects of the driving situation — being stopped at red lights tends to increase these types of behaviors, especially for city drivers, according to State Farm's study.

It makes sense that metro-area drivers may also be more likely than rural drivers to have a need to program a GPS given more complex directions and the desire for routes that avoid traffic.

Among all drivers with a cellphone, the percentage of respondents who reported owning a smartphone has significantly increased every year since 2011. This increase in ownership enables more drivers to take part in smartphone-related distracted driving, which can at least partly explain the observed increases in these behaviors.

For each age group, smartphone ownership has significantly increased since 2013. Nearly all adults under 40 years of age reported having a smartphone in 2015. Nearly 70% of those 65 or older have a smartphone, an increase of 30 percentage points since 2013.

7. The driving situation plays a role in drivers' decisions.

Driving situations can play an important role in drivers’ decisions to participate in cellphone-related distracted driving behaviors that involve looking at the cellphone and interacting with the screen and/or buttons.

8. Drivers generally support laws governing the use of cellphone while driving.

Respondents generally support laws governing the use of cellphones while driving, but over half feel that these laws are infrequently enforced.

Imprisonment and license suspension/revocation were the most commonly selected responses as the appropriate penalty for a driver that caused injury or death resulting from a crash while using a cellphone.

9. What would stop drivers from texting behind the wheel?

Drivers were asked what would stop them from using their phone behind the wheel. Their top answers:

Roughly 2 in 10 drivers reported reading texts frequently or sometimes while driving, whereas 14% respond to texts at these frequencies while driving. Respondents were also asked, what, if anything, would most likely deter them from reading or responding to text massages while driving. Here are their responses:

In August 2009 and 2010, and each year in July from 2011 to 2015, the State Farm Strategic Resources Department used an outside panel vendor to conduct an online survey of U.S. consumers ages 18, and older. Survey responses were received from approximately 1,000 consumers each year, who identified themselves as having some insurance and financial responsibility for their household. 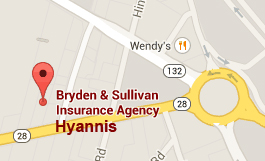 Bryden and Sullivan operates solely within the State of Massachusetts
Please note that coverage cannot be issued, started, cancelled, reinstated or changed via email
without written confirmation from our Agency.
Privacy Policy 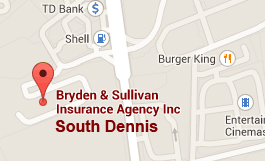